The Legend
The hawk-man, Wabula, was without a wife.  One day he visited a neighbouring tribe and was attracted to an unmarried girl, Burnba.  Wabula went to the nearby beach, caught some lobsters and cooked them.  Then he returned to the camp and offered them to the girl who, much to his disgust, would have nothing to do with him.

Wabula was determined to capture her.  He retired to a spot out of sight and hearing of the camp and there he built a bark hut.  That night he returned to the sleeping camp and carried Burnba away by force, placed her in the hut and blocked up all the openings so that she could not escape.

Afraid and lonely, Burnba cried all night for her father to help her.  He was a skilled magician and had a spear-thrower with which he had performed many wonders.  The first time he rubbed it, a heavy wind sprang up and grew stronger and stronger.  It blew violently upon the bark hut which shook so much that cracks appeared in it everywhere.  The magician rubbed the spear-thrower a second time and transformed his daughter into a butterfly.  In this form she was able to escape through one of the cracks.

At last the wind lifted the bark hut off the ground, and Wabula discovered that Burnba had gone.  Still yearning for the girl, he changed himself into a hawk so that he and Burnba could always live together in the sky. 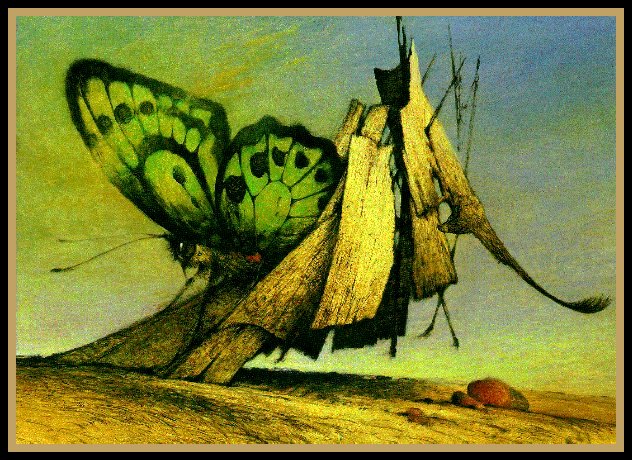