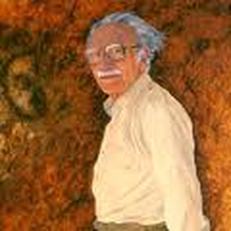 Ainslie Roberts AM
Here's a portrait of Dad.

Ainslie was a groundbreaking Australian artist.  He was born in 1911 and died in 1993 just after being awarded his AM (Member of the Order of Australia).

Ainslie was one of the first non-aboriginal artists in Australia to truly attempt to understand - and connect other people with - native aboriginal culture and mythology.  He literally left our western, city-bound civilisation for months on end and disappeared to the Red Centre and the Top End to spend time with various aboriginal communities.  I guess Ainslie was to art what The Bush Tucker Man was to food.  Both men made it their mission to bring aboriginal culture to the mainstream.

As you can see, Ainslie's methods are more closely associated with Western art than the traditional art forms of aboriginal artists (dot paintings and so on).   As a result I sometimes get asked if I think his work is politically correct (people are somewhat more careful about how they put the question, but this is the essence of it...) in the sense that Ainslie painted aboriginal stories and legends as a white man.

While I can understand these sentiments, which are largely from people whose aims I completely support, I often point out that in the 1950s and 1960s, the act of embracing aboriginal culture positively was quite extraordinary.  It wasn't until 1967 that Australia's aborigines were even counted in the national census!

I'm sad to say it even took Dad a long - LONG - time (his lifetime, really) for his work to be recognised widely because the level of interest in aboriginal culture was, alas, shockingly low.

Frankly, it wasn't really until the 80s and early 90s that the general public began to discover genuine appreciation for authentic aboriginal art.

So I guess I would say, Dad was a pioneer.  One of the people who lays a foundation that others follow.

When he was finally awarded the AM in 1993, it was for "service to art, particularly through the interpretation of aboriginal dreamtime mythology"

The story of One Pound Jimmy 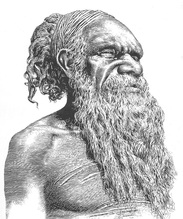 One Pound Jimmy - Ainslie Roberts
One of dad's most famous works features proudly on the Australian $2 coin.

Dad had drawn a picture of One Pound Jimmy, who was an aboriginal man called Gwoya Jungarai.  At the time, Dad was doing a lot of touring, painting and photography in the Northern Territory.  That image was later used on the Australian $2 coin in 1988 and is still in circulation today.

One Pound Jimmy was so called because he would always charge 1 pound for his products or services.